You may or may not know that Record Store Day, on April 19th, came and went.  I’m a little bit of a vinyl junkie, so I love this day.  Not enough to camp out 26 hours in advance outside of my local record stores, but enough to brave the mobs that show up to scour the shelves for the exclusive RSD releases.  I love the RSD goodies the owners give out, the free beer and live in store performances, and the camaraderie of fellow vinyl and music enthusiasts.  Of course the RSD exclusive I most coveted, the Ghostbusters 30th anniversary release, was long gone before I even woke up for the day.  With a limited pressing of only 2,000, my city only received a handful, and they were one of the first hot items to go.

If you’re a horror fan, or fans of film OSTs, now is the perfect time to get into vinyl.  There’s a lot of love behind the current releases. For example, this Creepshow OST released last month by Waxwork Records:

It’s pretty right?  Of course it is.  The artwork is done by “Ghoulish” Gary Pullin,  one of my favorite horror artists.  But there’s also a booklet inside with essays by George A. Romero and John Harrison, an art print, and the vinyl itself came in 5 different variants that represented the various segments in the film.  I fell in love with the Birthday Cake variant from the segment “Father’s Day,” and snatched up a copy before they sold out.  And all five variants did sell out. 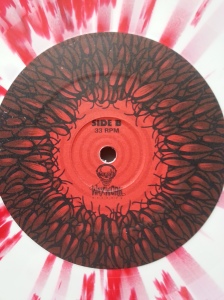 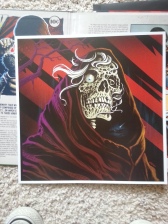 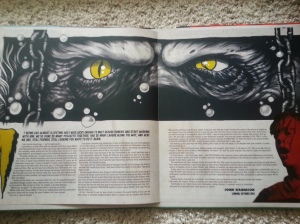 Their passion really shows; the work is..well, I’m in love.  While it may be difficult to get your hands on Creepshow, Waxwork Records is currently working on a vinyl release for Chopping Mall.

Death Waltz Records is another favorite, with Slumber Party Massacre set to be released this Tuesday.  Though not all releases are available to the US/Canada, so be sure to read the notes if looking to purchase.  They do link to another US/Canada based site for cheaper shipping options, as well.

My final recommendation is for Mondo. Luckily vinyl isn’t as popular as their posters, which have a tendency to sell out within minutes.  I’ve picked up their Halloween and Paranorman LPs, and I’m really looking forward to their Jurassic Park release this summer.

Between the three, my bank account doesn’t stand a chance.