I crossed a major bucket list item off of my list this past week- visiting the famous Catacombs in Paris. Just what exactly is the Catacombs? It’s a very large underground ossuary that stretches for miles below Paris, deeper than the sewer and Metro tunnels, and houses six million Parisians. Only a stretch of 2 km is open for visitation to the public as so many miles are deemed unsafe for exploration.

In 1780, the largest cemetery in Paris, Saints Innocents, became engorged with the dead. To make room for more burials, bodies were exhumed and stacked within the cemetery walls. With mounds two meters high, the overflow became a huge health concern for the adjacent neighborhood, with good reason. This wasn’t the only cemetery in Paris with an overflow problem, but as the largest it was the primary focus.

Abandoned mining projects in rich limestone turned out to be the answer and in 1785, the Council of State issued a decree requiring the removal of the human remains from Saints Innocents. The bones from all city cemeteries would be stored in the limestone quarries, and this transfer of human remains continued until 1860.

Only 200 people are allowed in the Catacombs at a time, so plan to get there as early as possible to minimize wait times (which can be up to 3 hours).  Open daily from 10-5, last admission is 4pm.  Entrance is a tiny green shed across the street from the Denfert- Rochereau Metro and RER line access.  There are no toilets, it’s about 57F underground, and you take about 130 steep steps straight down a very narrow spiral staircase upon entrance.  The above pic is your initial view as you make your way further underground, so if you’re claustrophobic this tour is not for you.  The ceilings are very low and the pathways are narrow.

Eventually you come to the Port-Mahon corridor, which features sculptures of the Port-Mahon fortress sculpted by a quarryman who had fought alongside Louis XV, and the “Quarryman’s foothbath,” or “bain de pieds des carriers.”  This was a well of groundwater used by the quarry workers to mix cement during the construction of the Catacombs. 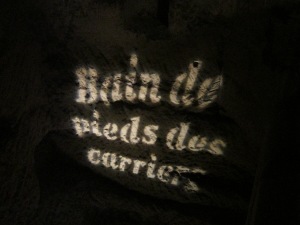 Then, you reach two pillars marking the entrance to the ossuary with a sign that reads, “Stop! This is the empire of death!”  From this point on, you’re surrounded by the bones of six million Parisians.

As no flash photography is allowed, some of my pics ended up a bit too dark.  It’s difficult to tell, but in the second photo above, the skulls were arranged in a heart.  To say it’s a surreal experience is a bit of an understatement.  The bones are stacked so elegantly, and the sheer amount of remains is overwhelming.  It’s one thing to read that there are six million bodies, but to see them is a totally different experience.  Sections of remains are labeled with the date of cemetery transfer as well as the name of the cemetery.  Artfully arranged columns of bones and an empty sarcophagus were instilled specifically to mask structural support, though you’d never know just by looking.

The end of the ossuary is marked by high arches and wet limestone. 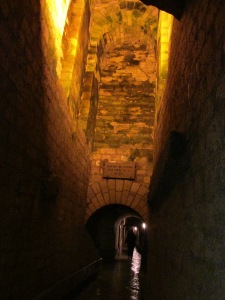 You end your tour by climbing up another narrow, steep wet-stoned spiral staircase that leads straight into a side street.  The same, unaltered steps from when the Catacombs was first constructed with a very rusted, thin handrail on one side.   A bit scary.

Paris, and its Catacombs, was such an amazing experience, and I’m so lucky to have the memory.

4 responses to “The Paris Catacombs”