Maniac, remake of the 1980 film, favors style over substance.  The premise is simple: shy Frank is a mannequin store owner by day, but stalker and scalper of women by night.  Photographer Anna unwittingly becomes Frank’s next obsession when she stumbles across his shop and seeks his help with her latest art exhibit.

What makes Maniac unique is that the film unfolds through Frank’s eyes.  Shot from the serial killer’s perspective, you only catch glimpses of Frank throughout the film, mostly in reflections.  It’s an effective method; you’re unnerved while watching the victims through his eyes yet you can’t help but feel some compassion for Frank.  Which is even more disturbing.  Frank is not gentle with his victims and the scalping scenes are brutal and gory.

Elijah Wood portrays Frank with a perfect balance of lonely innocence and schizoid creep.  Nora Arnezeder, who plays Anna, does a superb job as the object of Frank’s desire.  She manages to be both charming and endearing, which can’t be easy when forced to emote directly at the camera.  It’s her friendship with Frank that prevents the film from becoming too repetitive with Frank’s stalk and kill pattern.

I should mention that I’m a sucker for easter eggs, and I loved the nods to both the original Maniac and Silence of the Lambs.  I suspect this movie will be polarizing for viewers; I don’t see everyone buying into the film’s style therefore will be unable to get past the basic serial killer formula.  It worked for me completely, however, and elevated it above many other slasher flicks.  The performances were top notch and the killer’s POV added more depth to an otherwise predictable story. 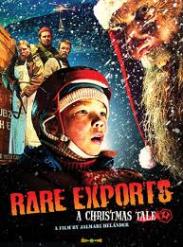 Based on award winning shorts, Rare Exports gives a delightfully dark twist to Santa Claus.  Set in Finland, the story revolves around reindeer herder Rauno and his son Pietari.  In a nearby mountain, Americans are setting off explosives under the guise of geological research.  Only Pietari and his friend Juuso know better.  They both sneak up one night and overhear the men in charge reveal that they’re actually trying to excavate Santa Claus.  Juuso is too old to believe, but Pietari believes wholly and he’s the only one noticing things aren’t quite normal.  To learn what he’s up against, young Pietari reads through books on Santa Claus and discovers what an evil entity Santa Claus really is.

As the community struggles with the loss of the reindeer, Pietari tries to warn them against the evil of Santa Clause.  His warnings fall on deaf ears, even when a strange naked man with a long white beard shows up at Rauno and Pietari’s house.  As the danger escalates and Christmas is drawing near, Pietari takes charge in effort to save his community.

Pietari and Rauno are both richly layered characters.  There is a lot of emotional depth to Rauno and Pietari, making them both strong protagonists.  Pietari is sweet and innocent, but struggles with guilt that he may be the cause of financial suffering this year.  Rauno loves his son, but struggles with trying to raise him alone.  He’s hyper focused on trying to keep them financially afloat, so it’s understandable that he ignores Pietari’s insistence they prepare against Santa’s arrival.  Rauno’s peers bring humor and much needed assistance for Pietari’s plan in the climax.

This movie is a blast and a must watch for the holiday season.  With the beautiful snow covered setting of Finland, reindeer, gingerbread, and a horrific take on Santa Claus it checks off all criteria for a perfect Christmas film.  There are elements that are reminiscent of The Thing and Gremlins.

The hidden easter egg in the extra features menu on the dvd contains the recipe for gingerbread from the film.  You can bet I’ll be testing this recipe out.

On Friday the 13th, 13 U.S. cities and 13 countries screened Paranormal Activity: The Marked Ones early.  T-shirts were given to lucky attendees, and hooded monks blessed audiences with a protection prayer prior to the film’s start.

Paranormal Activity: The Marked Ones detours from the main story we’ve become accustomed to with the first four films and shakes up the pattern audiences have come to recognize.  Instead, we follow Jesse, recent high school graduate in Oxford, California, as he celebrates with family and friends in a cramped apartment complex.  Enamored with a family member’s camera, he uses his graduation money to buy one of his own and films his everyday life with his best friend, Hector. Hector and Jesse begin using the camera as a means of entertainment now that school is done.

When a downstairs neighbor suffers an untimely fate, Jesse and Hector make the rash decision to explore the abandoned apartment.  Suffice to say things start spiraling downward fast when Jesse wakes up the next morning and discovers a strange bite mark on his arm.

The Marked Ones injects a lot of humor into the series.  Jesse and Hector endeared themselves to the audience early on with their sense of humor, making audiences all the more invested in his family’s fight to save him.  Also new to the series is the quicker pacing and lack of the tell tale crescendo of sound to indicate an upcoming jump scare.  That’s not to say that this movie doesn’t effectively build tension, oh it does, but those jump scares are no longer announced a mile away.  Though set in a new city with new characters, this film does tie directly into the series.  Poor lone survivor Ali, from Paranormal Activity 2, makes a brief appearance at one point to offer some answers.

Paranormal Activity: The Marked Ones breathes new life into a series that seemed to be on a decline and is a clever addition to the franchise.  Target audiences will love this film.

Paranormal Activity: The Marked Ones is out in theaters January 3rd.

This past Friday a scavenger hunt was held in 13 cities for Paranormal Activity: The Marked Ones.  Once the location in each city had been found, the city was then unlocked and reservations opened up for the advanced screenings this Friday the 13th.   Click here to rsvp for an advanced screening near you.  I have to admit, the PA series has been on steady decline but my curiosity is piqued for the spin off.

Or maybe you’d rather something more in the spirit of the holiday?  Catch screenings of holiday horror classic Silent Night, Deadly Night.  Click here for theaters near you.  Or, if you’re in the Houston area, check out the Alamo Drafthouse for tickets.  If you have an Alamo Drafthouse near you, I highly recommend you attend a showing here.  So much fun!

If I don’t attend one of the above showings, then I plan on staying in with friends, baking twisted holiday cookies, and watching classics like Sint or Rare Exports.  While those are directly tied to the season, I’m tempted to lump in favorites like the Thing or Cold Prey just for their setting.  What are you favorite holiday horror films?